Something that I have gotten really into recently is x64 Assembly programming. So, I thought I would jot down some of the notes that I’ve collected from developing in the language. I am using the MASM assembler in a Visual Studio environment as their memory, registers, and debugging tools work well for my needs. Note: I will use routine, sub-routine, procedure, and function interchangeably, but they all effectively mean the same thing.

There are some registers that have special behavior based on the instruction that you are using. RCX combined with the loop instruction is one such set. Below is an example that will increment the value in the rax register 8 times.

; TODO: Make a table for the FPU registers

First of all, this document is very helpful for understanding Microsoft calling conventions.

In short, Microsoft uses ECX, EDX, R8, and R9 as the first four arguments for a procedure call and any remaining arguments should be pushed onto the stack. Below is a sample from their docs:

The following is the calling convention for using floats as arguments to functions. Note, if you mix input arguments, you should still be using the order described in the samples. That is to say if you have an int as the first argument and a float as the second argument, you should use RCX, XMM1 respectively.

Lastly, when calling a procedure, the return value for the call (if any) will be put into RAX.

When using fast-call it is important to note that if the routine is either to be called from another language such as C or C++, or if you are calling a function that is in another language like C or C++, you need to make sure to support shadow space also known as home space. I’ll call it shadow space from now on because it sounds cooler. This shadow space is 32 bytes long (since we are in 64-bit assembly). Basically what it boils down to is that you need to move the stack pointer RSP 32 bytes before doing a call (keep in mind 16 byte alignment of the stack). Let’s take a look at Microsoft’s HeapAlloc function (basically malloc) as an example of how this would work. Below is our own implementation of malloc which we will call halloc and use the Windows api function HeapAlloc.

What you will notice in the above code is the instructions sub rsp, 20h and add rsp, 20h which are adding and removing the shadow space respectively. This is a little bit annoying but I personally don’t require the shadow space when I am calling routines that I don’t intend to expose to a higher level language like C. This means that I mainly only have to add it when I am calling into a function that I would like to use from the higher level language library. For a short added reading on this, check out this Microsoft blog post.

Something I like to do is to have a routine for doing shadow space calling for me. Basically you pass the function you want to create shadow space for calling into rax (in my case) and then you add and remove the stack space around the call as you normally do.

The above instructions has a few things going on. The most interesting thing that is going on is that we do pop rbx. The reasoning for this is because we don’t want our return address to be part of the shadow space as it might get overwritten by the external function. So we need to remove it from the stack and store it in a non-volitile register to return with later. The second thing is that we are using and rsp, not 8. This just makes sure that the stack is 16-byte aligned before it does the external call, otherwise you’ll probably wind up with a memory access violation.

At this point you might be wondering, if there are more than 4 arguments to a function call and the remaining arguments are put onto the stack, how does this work with shadow space? Since the fast-call calling convention requires the shadow space (whether or not it uses it) and that alters the stack, your question should be, “do I push to args to the stack before or after adding the shadow space?”. The answer is to push the args before you add the shadow space.

Something I am aware of, but honestly haven’t fully explored, is that the stack is on a 16-byte alignment. That is to say that if you are to push only 1 8-byte value onto the stack, you should padd it by adding the other 8 bytes. You could push the value 2x or, more preferrably, just move the stack pointer. Below is an example of this exact scenario.

Often you’ll want to start your program off on the right foot by aligning it. Believe it or not, it doesn’t always start off aligned.

Setting up a x64 only project in Visual Studio

Make sure to give your project a suitable name during the configuration step. 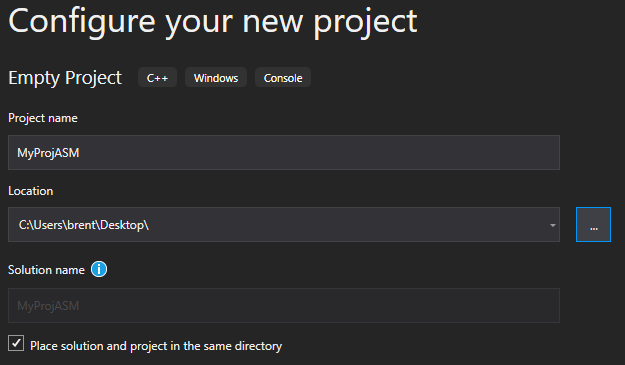 Something that I like to do is get rid of the normal Visual Studio solution explorer folders and just show all files so that I can setup the directories how I want to set them up. 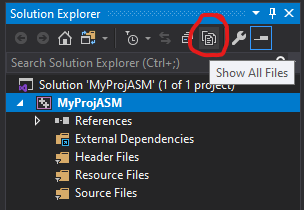 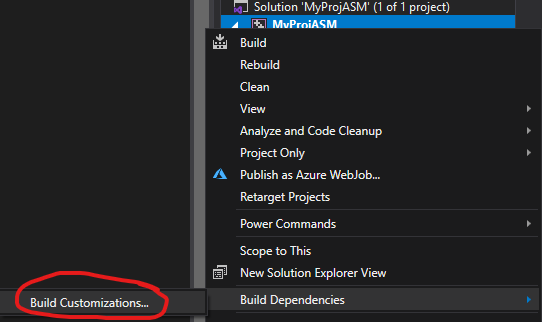 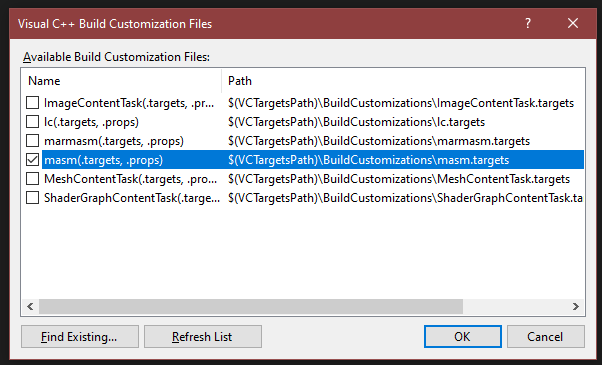 Now lets create a src/main.asm file to make sure things are setup correctly. When you create the file, right click on it and go to the file’s properties. 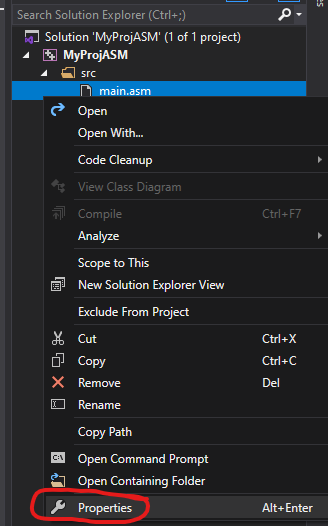 You should see that the file type is set to Microsoft Macro Assembler.

Then you need to go to the Linker->Advanced settings and set the Entry Point value to main. Note: Make sure that you are in x64 mode and not x86. 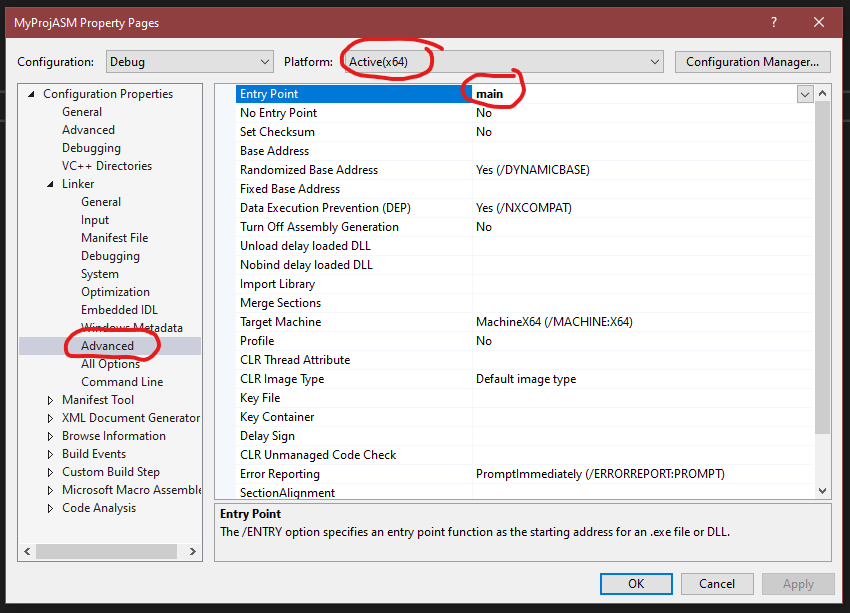 Now that you have done all that setup, turn your debugger to x64 mode (through the dropdown in Visual Studio next to the debug button) and test things out. 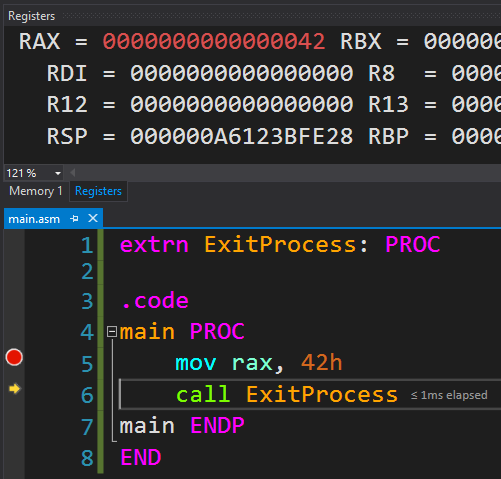 NOTE: if you are getting an error when building some-time in the future that says something along the lines of unresolved external symbol __imp___CrtDbgReportW, the problem seems to be the multi-threaded debugging runtime library setting. Changing from “Multi-threaded Debug DLL (/MDd)” to “Multi-threaded DLL (/MD)” in the visual studio project settings seems to have done the trick. You can find it in Project Settings->C/C++->Code Generation->Runtime Library. 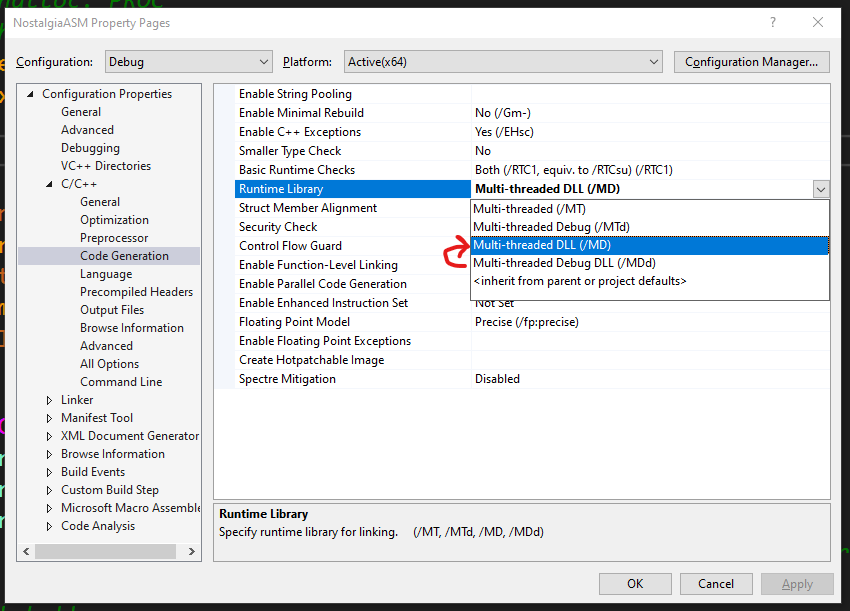 What better way to learn something than through some code examples. Below are some ASCII string query routines that I have written in x64. Note: these routines are slower, but it works good for example sake. I use a faster versions of these routine in my personal code that account for cache lines and heap access.

strlen - Get the length of a string.

strstartswith - Determines if a string (haystack) starts with another string (needle)